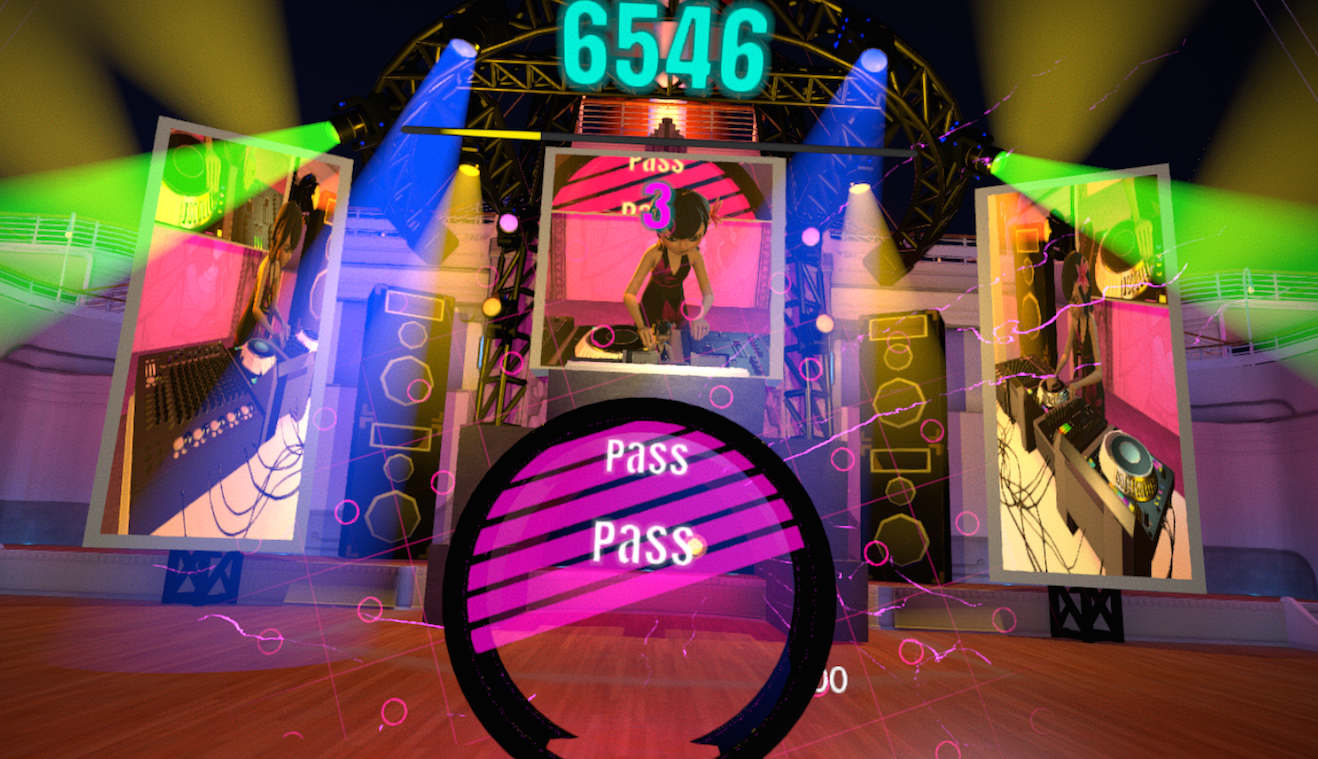 On July 16th, VR arcades across the world got a little funkier (and a little spookier) with the release of Hotel Transylvania Popstic VR! This colourful rhythm game is all about moving to the beat, using the Popstic controller attachment to dance in time to the music (spun by familiar characters from the movies, what’s up DJ Drac?) and hit incoming targets and sidestepping the obstacles that come your way.

We’re always down for an awesome VR rhythm game, and are so pleased to have worked with Specular Theory, developers of the game, to integrate the MixCast SDK in their release!

We got a chance to chat with Morris May and Ryan Pulliam, two leaders of the Specular Theory team, about their charming Hotel Transylvania game, and how the rhythm phenomenon has changed the face of VR gaming.

Congrats on launching Hotel Transylvania Popstic in VR arcades across the world! Tell us a bit about the experience.

Morris May (CEO/Founder): Thank you! It’s been a really positive experience. Our platform partners and all the arcades have been great. The feedback we’ve been getting from people playing the game is really exciting. Everyone really loves the powerups and using the Popstic, which are unique features.

Rhythm games seem to be having a moment on the VR scene! What makes Hotel Transylvania Popstic special?

Ryan: It’s in the title! The fact that it features characters and assets from Hotel Transylvania, a major movie franchise and recognized brand, and bring them to life in a music and rhythm game makes it really fun . It’s also special because of the Popstic, a custom peripheral attachment we made to quickly pop on and off a Vive controller. It’s very user friendly and eliminates the need to actually hold onto a controller. Younger people can use it to come up with crazy cool moves, while older users and beginners will only have to deal with one controller instead of two. This game is really about the music, rather than simply a game set to the timing of the music. It’s a strategy and puzzle game with elements from EDM, poi spinning, and flow arts.

Morris: We designed the game with three levels: Easy, Normal and Hard. Each level is such a different experience – it’s kind of like 3 games in one. The hard levels get a little crazy. It has powerups that let you do things like slow down time. You can also spin your Popstic really fast to build up energy which you can then blast thru obstacles with. It’s more strategy based, and relies on how you move your body and your Stic. Hardcore gamers and people who like ‘Superhot’ will love this mode. This is the one for them. 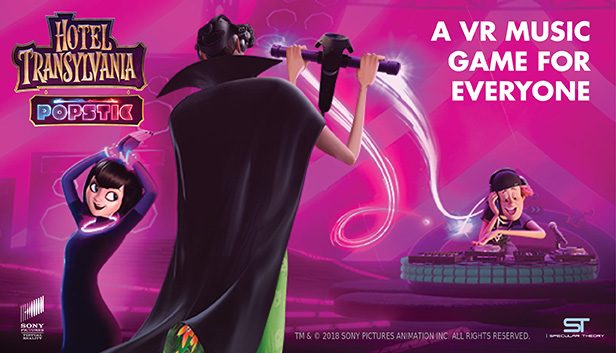 What can fans of the Hotel Transylvania movies expect to see in-game? Any familiar faces or places to keep an eye out for?

Ryan: Fans of Hotel Transylvania will be happy to see stars Drac, Mavis, and Johnny. Select Mavis, Drac or Johnny to become your DJ, then select songs from their playlist inspired by the character’s personality. It’s fun because the game lets fans interact with their beloved characters in a whole new way. Seeing these characters as a DJ with their DJ moves is hilarious. It’s like Drac turning into Tiesto! (Lol)

Players should also look out for the Invisible Man character, AKA Griffin, who acts as a tutor and guide in the EASY level of play. He appears as a pair of floating glasses, just like in the movies. He’s a great tool for letting you have a social experience in the game.

What sort of music can players expect to groove out to?

Morris: As of now, there are 9 songs, and each song lasts about 4 minutes. Each character has a playlist that fits his or her personality, so players choose their favorite DJ and then experience a set that’s tailor-made for them. Players can choose between Johnny’s rock songs, Drac’s electro mixes, or Mavis’ smooth vocal jams.

Your very first trailer/teaser was captured in mixed reality. How important is it to show a player’s presence within a VR experience, especially a game like Hotel Transylvania?

Morris: Mixed reality videos are essential. They really let people see what the game is like,  and how much fun it will be to play themselves. I also love the MR videos because you can check out other players’ styles — which is part of the fun with this game. Everyone has a different approach and technique! 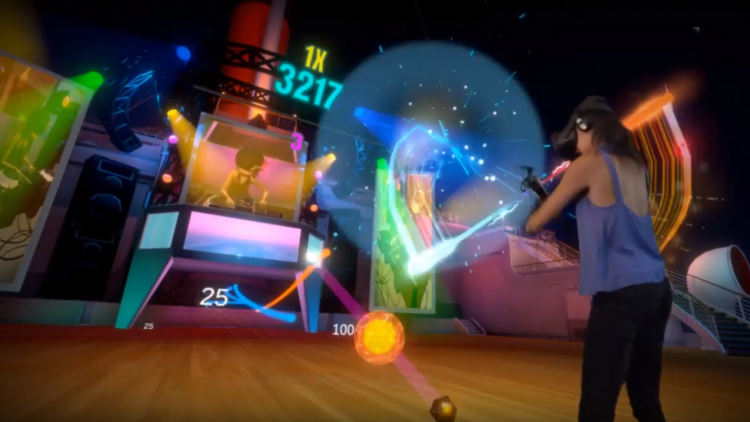 Your very first trailer/teaser was captured in mixed reality. How important is it to show a player’s presence within a VR experience, especially a game like Hotel Transylvania?

Morris: Mixed reality videos are essential. They really let people see what the game is like,  and how much fun it will be to play themselves. I also love the MR videos because you can check out other players’ styles — which is part of the fun with this game. Everyone has a different approach and technique!

How has your experience with setting up and capturing MR content been so far?

Morris: We had a really good time with friends and gamers coming in to play the game and then capturing them in MR. It was great to see them experience it for the first time, get really into it, and then develop their own individual style.  We also used MR videos to help design the game. We would record ourselves playing the game, and then use what we’d captured to help refine and tweak the experience.

Where can people go to play Hotel Transylvania?

Morris: The game is built from the ground up for arcades, and is only available at arcades. Right now it’s available at over 500 VR arcades across North America, Europe, Australia, and China, including on SpringboardVR, Private Label VR, Synthesis VR, Steam Commercial, Viveport Arcade and at VR World NYC, and Viveland.

How did this project come about?

Ryan: We wanted to create a really fun game for arcades using our peripheral attachment.  We started making the game last year and were planning to release on our own. When Sony Pictures Virtual Reality mentioned partnering with us to create a Hotel Transylvania version of the game we were thrilled. Music and rhythm games have always been popular and are great for the VR arcade market. Having a major movie franchise attached to the game is a great way to introduce a game to consumers and first time VR players as well as help drive traffic to the arcades. It’s really a win-win-win for VR content creators, arcade owners and consumers.

This game features characters from a movie but it is not a movie tie-in or promotion,  it is a game of itself. It’s really cool that SPVR allowed us to take movie assets and characters from the film and integrate them into a music game and it’s something we can build upon and create an engaged community of fans around.  We are creating a whole series of games that are “stic-based” using the Popstic. Hotel Transylvania Popstic is the launch title for our platform and we are stoked to bring it to VR arcades worldwide. In just a few days from launch we’ve become one of the hottest games in the arcade marketplace and it’s a huge hit at VR World NYC and Viveland!

Thanks Ryan and Morris! If you’d like to try your hand at this monster mash of a rhythm game, check out your local VR arcade, and don’t forget to follow Popstic VR on Twitter and Facebook to see what’s next from this awesome team! 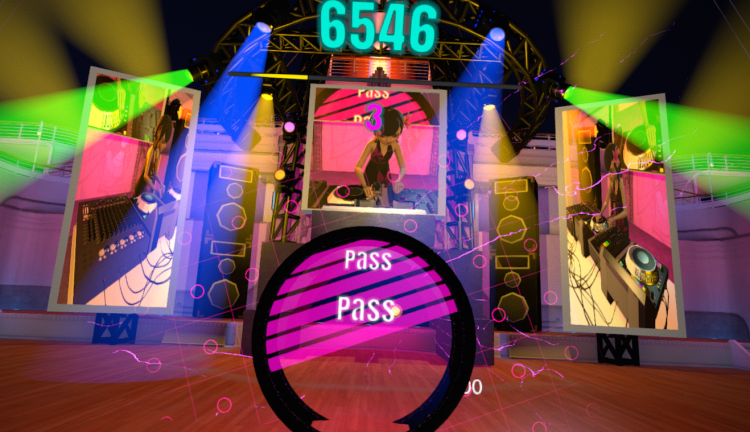