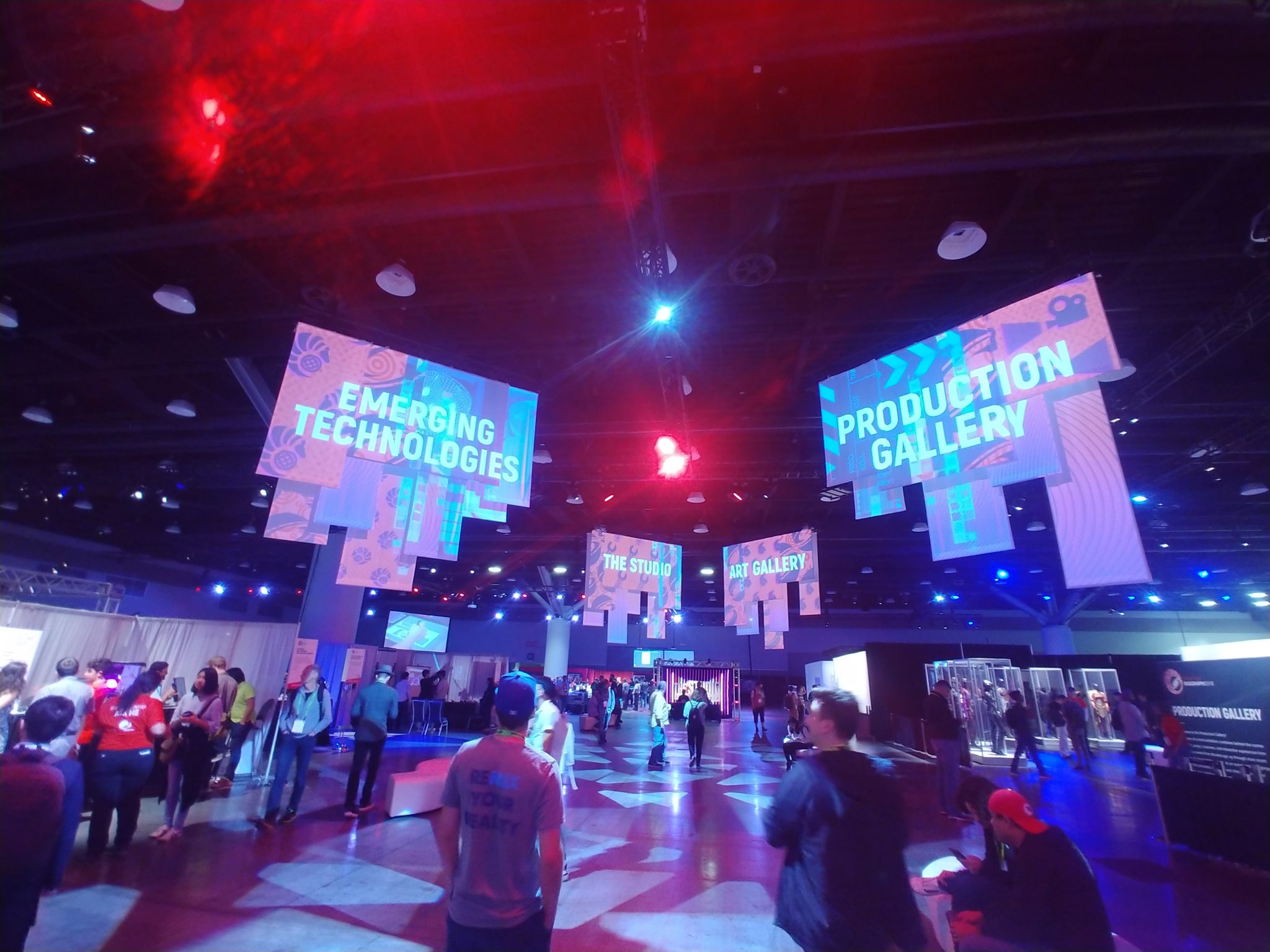 Our Favourite VR Moments from SIGGRAPH 2018

ACM SIGGRAPH is a massive annual gathering of the world’s CGI professionals. From real-time game rendering software, to the latest graphics hardware, to the people who put movies like Coco and The Avengers on the big screen, you’ll find them all at this five-day convention.

Since the event’s host city changes every year, we couldn’t wait to take advantage of SIGGRAPH finally returning to Vancouver. Not only did we throw our very own Mixed Reality Mixer to help connect the VR professionals visiting the city, our own team of developers got the chance to take in the demos on the main exhibit floor, as well as watch some excellent talks.

The Breakthroughs of Today

From day one, our schedule was jam-packed with talks, sessions and time on the expo floor. We ended up seeing so much that we decided to condense our learnings down to some bite-sized takeaways. Enjoy!

The view from the line for the VRCADE at #SIGGRAPH2018. The decor and low lighting is quite pleasant. pic.twitter.com/SVEqQxqMxg

From the expo floor:

Like this one, that you strap to your arm and it senses when you extend it, making it look and feel like your arm extends out like one giant noodle: pic.twitter.com/EXSUOg7uzK

One could argue that every single booth, talk and conversation held at SIGGRAPH could be a hint at the astonishing tech we may find at our fingertips one day. But one thing truly stuck us as an inspiring sign of what’s to come: the quality of work, research, and discoveries that are coming from the young minds who are only now entering these industries.

Cue the Poster Sessions. These early-stage research projects were put together by undergrads and other younger students. They may not be ready to present a PhD paper, but still had some complex, diverse ideas to share, and so created a number of “posters.” (Essentially complete abstracts and research projects condensed onto a single large page.) These were then presented and discussed at a number of relevant sessions. Our favourite featured AR-assisted physical deformation of virtual objects in sync with real-world counterparts,

Interested in seeing more? We’ve uploaded photos of a number of other posters for you to check out here.

Young students aren’t the only ones looking to push the future of VR. We got to speak with Timoni West, director of AR/VR research at Unity Labs, about their upcoming virtual UI tool, Editor XR.Editor XR will be a big step forward for Unity VR devs. Essentially, it’s the upcoming VR UI for the Unity editor, and will introduce a new feature where a user can edit miniature scaleable models of their virtual environment. Those edits will then be replicated real-time in the environment itself. Sounds like a great visual to demonstrate in MixCast one day.

Similarly, raising the virtual bar here in Canada is Campbell River Creative Industries. They told us about some super exciting tech developments on Vancouver Island, including a fibre optic network, and a new VR arcade called Headcase. We’ll certainly be visiting soon!

Over the years, SIGGRAPH has not only grown in size, but scope. It has expanded to encompass VR in a big way (the Immersive Pavilion featured everything from short films, to games, and all-new VR tech.) It also made room for more commercialised tech, and even some top-notch student research. If next SIGGRAPH will be your first, be sure to come in with a solid agenda of what you want to learn, see and do. You’ll still be drinking from the firehose, but in the best possible way.

Considering the theme this year was Generations, we really felt like we were seeing the many unique generations of technology—future tech, new and emerging, or past tech, trusted and ever-changing—and loved the opportunity to learn from each one.